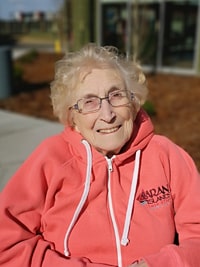 It is with the saddest of hearts we announce the passing of our beloved mom, Elizabeth Beryl Boyle (nee Jones). Beryl as she was lovingly known was born November 6th, 1930 in Widnes, Lancashire, United Kingdom, and went to be with her Lord and Savior on October 20th, 2019 in Edmonton, Alberta, Canada at the age of 88 years. She was predeceased by her parents Thomas and Annie Jones, her brother Terence and sister Pauline, and her beloved husband and best friend Hugh Francis Boyle.

Beryl was a compassionate and beautiful person who spent her life caring and nurturing others as a mother, grandmother, friend and RN. She is survived by her nine children, 26 grandchildren, and 17 great grandchildren who loved her dearly. She met her loving husband Hugh in England after the war. They were married in August of 1951 in England and moved to Dublin, Ireland where they raised their children. With aspirations of more opportunities for their five youngest kids they emigrated to Canada in August of 1981. They settled in Edmonton where she continued her nursing career until her retirement from the University Hospital in 1992. After her retirement she volunteered with great enthusiasm for her church. She also travelled extensively over the years visiting her children and grandchildren who were her legacy and light of her life.

We would like to extend our sincere thanks to the nurses on Station 51 at Grey Nuns hospital for their compassionate care of mom in her last two weeks of her life. We would also like to acknowledge the loving care she received from the staff at Chartwell Heritage Valley, moms home for the last 18 months. In lieu of flowers, donations can be made to the Alzheimer's Society.