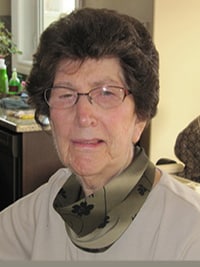 On February 8, 2018 Elvira (Nanny) passed away at the U of A Hospital at the age of 83 with her family by her side after suffering from a major stroke in December.

She is predeceased by her parents, Julia and Knut Sandlan, husband, Robert Ste-Marie, and her brother and sisters, Orpha (Bill) Seymour, Ila (Frank) Pearce, Ernest Sandlan, and Ada Sandlan.

Elvira grew up in Piney, Manitoba and took her psychiatry nursing training in Selkirk, Manitoba. For many years she worked as a Registered Psych Nurse and retired in Fort McLeod, AB.

After retiring and surviving colon cancer, Elvira moved to Red Deer, AB to be closer to her sister and later in 2016 she moved to St Albert to be close to her daughter.

Nanny loved to spend time with her grandchildren and traveled all over the world when she was able to. She will be sadly missed by family and friends alike. Nanny was liked by everyone who met her because of her kind, and generous nature.

We would like to recognize the excellent care from the nurses and Dr Hamadeh of Unit 5A2 (Stroke Unit) at U of A Hospital. Their compassion and dedication did not go unnoticed.

Service:
Elvira was cremated and a celebration of life is planned for a later date with immediate family.