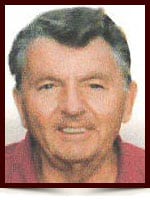 It is with great sadness that the family of Gene Eurchuk announce his passing at the age of 79. He leaves behind his wife of 58 years, Carol Ann, daughter Nancy, granddaughter Michelle (Stephen), great grandsons Robert and Ivan, and brother Michael (Shirley). He was predeceased by his brother Walter and his son Grant.

According to Gene’s wishes, there will be a private memorial for immediate family at a later date.

In lieu of flowers, donations can be made to The ALS Society of Alberta in Gene’s name.