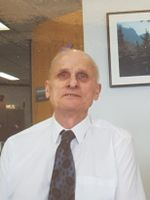 On June 14, 2018 Floyd Charles Lund passed away peacefully at the Royal Alexandra hospital he was 86 years old.

Floyd was born on July 30, 1931 in Hughenden, Alberta. He worked with his Father in a family owned grocery store in Redwater for many years, and ending his career as a Storesperson Supervisor in Edmonton for the Military Base Transportation at CFB Edmonton from 1974-1992. He married Edna Vandenberghe Stephens in 1999 and gained 2 step-sons, Todd and Wade Stephens. Floyd was Grandfather to Jordan Stephens and when he was young, they enjoyed reading, watching movies and laughing together. And Jordan especially enjoyed when Grandpa would take him and treat him to McDonalds.

Floyd travelled in his younger years to Europe including the Scandinavian Countries and Britain.

He led a quiet life, but enjoyed watching sports very much, with Hockey being his favorite. Floyd was an avid curler in his younger years and his sister, Yvonne was amazed by his fantastic memory.

In his later years, Floyd enjoyed his weekly coffee meetings with his friends at Capilano Mall, and his weekly senior programs.