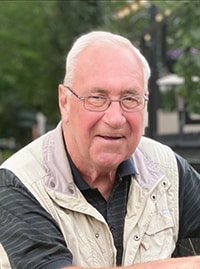 It is with great sadness and heavy hearts that the family of Garry Prokop announce his passing the last week of January, 2021, at his home in Edmonton. He was born on April 8, 1944 to George and Agnes Prokop (both deceased). The oldest of 4 siblings, he is survived by his pride and joy Adam, his grateful son and his former wife Nora Martin. He will be lovingly remembered by his siblings Carol LaCharite (Dave), Greg, and Candice and his nieces and nephews, Tara, Renee, Jennifer, Michael, Nicole, Shay, Jesse and Sam as well as many great nieces and Wendy Whyte, his caring friend.

Garry grew up in Regina where he graduated from Campion High School and received a BA at the University of Regina. He held various positions in community relations and lived in Regina, Pasqua Lake, Calgary and finally Edmonton.

He cared for and enjoyed his family in his own unique way, from teasing his younger siblings, blatantly ignoring board and card game rules, to ensuring his elderly mother was frequently visited, advocated for, and teased. He kept himself fit and healthy by being involved in many sports from hockey, racket ball and tennis, to golf. If he wasn't coaching someone, he would be cheering on his favourite teams broadcasts.

He will always be remembered for his love of a good bottle of wine, his openness for a heartfelt and honest conversation, and his attempts to justify the extra card he happened to find at the right moment.

Always willing to explore parts of the globe, Garry was able to overcome a dramatic life change, and continued to strive past personal and physical challenges with a trademark grin, relishing in teasing family and friends, and rekindling past relations.

He was an excellent father, brother and uncle and will be missed by all.

There will be no funeral at this time but a celebration of life will be held at a later date.