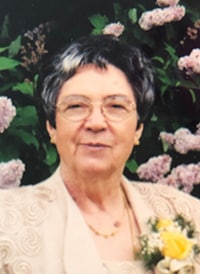 It is with profound sadness and heavy hearts, that we the family of Gelsomina Mastronardi announce her passing on April 25, 2019 at the age of 85 after her courageous battle with Myelofibrosis and chronic heart failure amongst other health complications from over the years.

She will be greatly missed by her husband Gelsomino “Jim”, her children Quirino (Julie), Frank (Carrie), and Annette (Paul); grandchildren Katrina (Josh), Kade (Lisa), Adam, Medena, Kyla, Daenen; great-grandchildren Harris, Sophia, Elle and Philip, her brother Frank (Rosa), many nieces, nephews , countless friends and family from all around the world.Gelsomina was predeceased by her first baby, a son as well as  her parents Medina and Vittorio and by her brothers and sisters.

Gelsomina was born on March 22, 1934 in Villa Canale, Italy, from a family of 11 children. In 1951 she married Gelsomino and they had two children who were born in Italy, Quirino and Franco. In 1957, Gelsomina and Gelsomino decided to move their family to Canada to make a better life for themselves and then were later blessed with the birth of their daughter, Annette. Over the years, Gelsomina worked for GWG as a seamstress and as well for the Edmonton Catholic school board. She will always be remembered for her love for her family. She was an amazing cook and hosted many large gatherings with friends and families.

In lieu of flowers, if family and friends wish, a memorial donation in Gelsomina’s honour may be made to the Heart and Stroke Foundation.

The family wishes to extend their sincere gratitude to Dr. Fatima Alfaki and Dr. Robert Turner as well as the staff on Unit 43 at the Royal Alexandra Hospital and to our extended family and friends who supported her and us through her life journey.