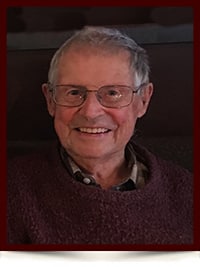 George passed away peacefully with family and Reverend Harry Currie by his side after a brief stay at the Royal Alexandra Hospital.

He lived a long, full, independent and positive life. Born in Brockville, Ontario, he married Hazel Kearny in 1940 and moved his family to Edmonton in 1948 where he lived to be 95 years old.

George was pre-deceased by his wife, Hazel, son, Rob, son-in-law, Don, his parents George and Rhoda, his brother, Bill, and sister, Muriel.

George’s ashes will be placed alongside Hazel’s at a private family service at the Beechmount Cemetery Field of Honour.

A Service of Remembrance will be held at First Presbyterian Church (10025-105 St.) on Sunday, October 22 at 4:00 pm with Reverend Currie officiating.

Donations in memory of George can be made to First Presbyterian Church.