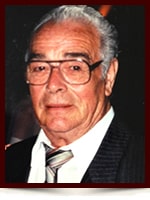 It is with profound sadness that the family of Giuseppe Margiotta announce his sudden passing on January 1, 2013 at the age of 89 years.