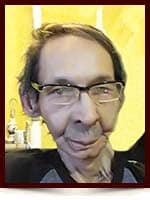 On May 13, 2016 Glen Hunter of Edmonton Alberta passed away at the age of 63. Glen leaves to mourn: his brother Tom (Jori) Hunter; sister: Suzy (Roger) Cardinal, four nieces:  Nicole Haineault, Jennifer Poitras, Rhianne Burd and Shayla Betts; two nephews: Tim Callioux and Geoffrey Betts, and special friend Georgina Pagnana, as well as numerous aunts and uncles and extended family, and many dear friends he made during his time at Sparling Lodge. Glen was predeceased by his parents Raymond and Delphine Hunter and brother George Hunter as well as paternal grandparents George and Anne Hunter and maternal grandparents, Josephine and James Ward.

The family would like to give a special thanks to Lori and Wayne Morley, Elsey and Francis Whiskeyjack, as well as the staff at the Sparling Lodge, and for the care shown to him at the Royal Alex Hospital.