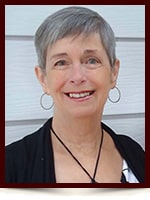 It is with broken hearts we announce the passing of our Mom, Michelle (Mang) Vernon. She passed away quietly in her sleep surrounded by her children after a short battle with cancer.

Mom had many passions in her life, but at the centre of them all were her four children and three granddaughters. She was at her happiest with all of us around the dinner table, laughter filling the room as we shared new stories and recounted others that had been told a million times before.

An avid reader, Mom loved being curled up on the couch with her cat and kobo, with curling on the television. A firm believer in staying informed, CBC Radio has lost an avid listener, Global News a loyal viewer, and the Edmonton Journal a decades long subscriber.

One month before her passing, Mom spent 10 days touring Iceland and Scotland, a trip that was to be just a primer for a European river cruise scheduled for next September with her friends.

Left to mourn are her children Alanna (Rob) of Kelowna, Daniel (Brandy), Thomasean (Sarah) and Lindsay (Graham) of Edmonton and her three granddaughters, Mya, Aubrey and Claire. Also mourning are her brother John (Susan) of Comox, and many more loving cousins and close friends. Mom was predeceased by her parents, Lawrie and Mickie Mang of Regina, SK.