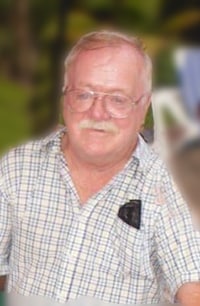 After a valiant and courageous battle against cancer Jim passed away June 17, 2019 with his family by his side. Jim is survived by his loving wife of over 53 years Donna, his daughter Brenda (Jim) , his son Warren (Jacquie), 5 grandchildren, Tommy (Lisa), Cody, Bobby-Jo, Bo (Jenna) and Dakoda, 2 great grandsons Tristan and William, his brother Bill, 3 nephews and 1 niece that he thought of as his own children Douglas, Gerald, Robert and Cimmeron, godson Tyler Edworthy as well as numerous other family members and friends.

Jim was predeceased by his parents Albert and Rosina Slade, his in-laws Walter and Effie Barlow and 2 brothers, George and Robert Slade. Jim’s happiest moments were spent with his family by his side. His family meant the world to him and he always had smile on his face when they were around.

In lieu of flowers Jim would like you all to hug your family and make a memory that is what life is really about.