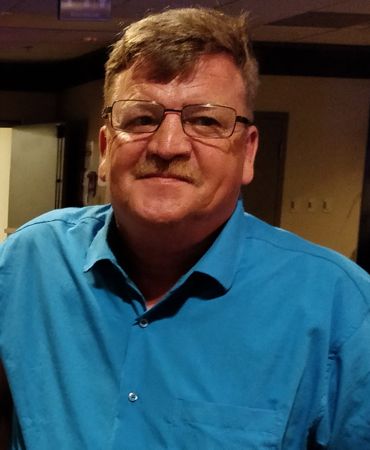 Wade passed away from cancer, with his family at his side at Norwood

Hospice on August 13, 2019. He was dealt a dreadful hand, and his attitude was, “I won’t go without a fight, I can’t sit at home and whine” and he didn’t! He was born in Winnipeg, MB on December 5, 1961. As it was a military family, many moves took place in his youth. He worked for the Edmonton Public School Board for more than three decades. Wade had many interests, including hunting, fishing, camping (with his kids) and cheering on the Oilers. He is survived by his loving wife of 32 years, Bonny; four children: Jamie (Dan), Shannon (Matthew), Tracy (Max), and Jayden; two grandchildren: McKenna and Logan; two brothers: Don and Scott; mother: Marion Sim, as well as many cousins, sister- and brother- in-laws, and nieces and nephews. Wade was predeceased by his father, Howard Sim, and his father/mother-in-law, Ted and Stephina Harris. Wade was extremely proud of his family, their accomplishments and comradery as a group. His humor and energy will be sorely missed.

A “Celebration of Life” will be held on August 24, 2019 at 1:00pm at Amiskwaciy Academy, 101 Airport Rd NW, Edmonton. Interment at Stephen’s Cemetery Will be held at a later date. In lieu of flowers, donations can be made to Capital Care Norwood palliative unit or a charity of your choice.