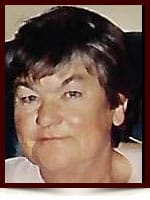 As well as numerous nieces, nephews, cousins and many friends.

Joan was predeceased by her loving husband Thomas Kershaw in 2013 and her parents Patrick and Maude-Amelia Lynskey.