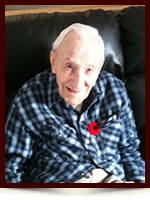 It is with deepest sadness that we announce the peaceful passing of John Schroeder at the age of 94 years, after a long and fulfilling life.

John was predeceased by his wife Dorothy; daughter Lorna; brothers Laddie, Nick and Hugh, and sisters Winnie and Ruby.

Special thanks to the residents and staff at the Allen Gray Lodge of Edmonton where John resided and enjoyed the last year of his life.