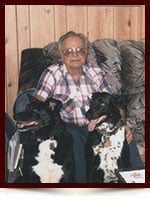 It is with great sadness the family wishes to announce his passing.