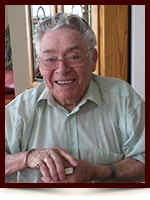 Joseph Bowman died peacefully in his sleep at the University Hospital on July 7, 2017 with his family close by.

Joseph was predeceased by his wife Pearl Maureen Bowman. They were married for 56 years moving to Canada in 1957 during that time to start a new life.