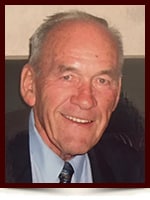 On the morning of January 8, 2017, Ken McFadyen died peacefully at the age of 88 years.

Ken worked for the CNR for 43 years, his first job at 18 until his retirement at 61, and was an active and loyal union member. He also enjoyed his part-time job at the Northlands racetrack where he worked for 20 years from 1966 to 1986.

He was a bird hunter, fisher, golfer and sports fan. He also enjoyed playing cards and reading.

Ken maintained an immaculate yard, loved gardening and had an amazing apple tree. Every fall he had bags of produce to give away to neighbours, friends and family.

Ken sold his Northgate house and moved to the Waterford at Summerlea in 2015, where he made many good friends among staff and residents.

Ken will be remembered and missed by all who knew him.