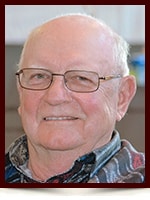 It is with great sadness that the family of Lawrence Harvey announces his passing on Saturday, September 21, 2013 at the age of 73.

He was born on September 28, 1939 to Duncan and Marjorie (Shand) Harvey in Hardisty, AB, the oldest of 3 children. He met and married his bride in 1960 and a few years later he settled his young family in the Ardrossan area and commenced a lengthy career as a pipefitter. He loved going on cattle drives, gardening, golfing and enjoying a laugh with his family and friends.