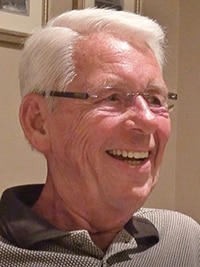 Dr. Lorne (“Tag”) Franklin Bewley passed mercifully away two weeks shy of his 89th birthday in Breton, Alberta. Lorne was the only child of parents Reginald and Evangeline Bewley who were married for 71 years. His keen sense of humour is sadly and lovingly missed by his wife of 26 years, Lucille Bewley, daughters Kristine MacKinnon, Karen (Ken) Macquisten, Jaye (Marc) Bewley, and by Macquisten grandchildren Michael (Shayna), Robert (Joy), Steven, Ali, and great-granddaughter Scottie.

Born and raised in Edmonton, Lorne was a very successful practicing Optometrist and established numerous optometry dispensaries throughout Edmonton during his career. After graduating from the University of Toronto in 1952, Lorne bought Innes Optical from his father, and married Joyce Green in 1953. Lorne’s professionalism, witty humour and kind ways made him very popular with his patients. He was an active Kinsmen Club of Edmonton member, and loved boating on the West Coast. Later in life he and Lucille shared many happy times, always close to water, at Mulhurst Bay (Pigeon Lake, AB), and Osoyoos, BC.
“Grandad” was a novice magician and is famous in the family for teaching his grandchildren to fly. An avid bridge player, skier, story teller, wood-worker and businessman, Lorne lived life large.

At Lorne’s request there will be no service. His family will share his many hilarious stories at one of his favourite places, Bedwell Harbour, BC, later this year. Special thanks to the wonderful staff at the Breton Health Centre for their loving care the past 3 years.