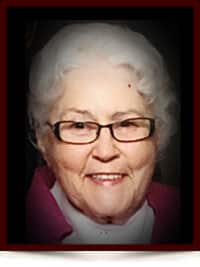 Mary-Ann Eva Lingrell was born December 6, 1930 in Red Deer, Alberta to William and Evelyn Reeves (Forrester). She was the third of four children born to William and Evelyn. She had two older brothers, Charlie and Ross, and a sister Sarah. Evelyn suddenly passed away in 1936. William later married Hilda Reeves (Mitchell) and gave Mary-Ann two more brothers, Harold and Gordon, and another little sister Jeanine.

Mary-Ann was a devoted wife and mother who worked as a seamstress, cook and as a nurse for 25 years.

Mary-Ann passed away June 28, 2017 in the Leduc Community Hospital with Lyle and her family at her side. She is pre-deceased by her mother Evelyn, brothers Ross, Charlie and Harold, her father William, stepmother Hilda and grandson Michael. She is survived by Lyle, her devoted husband of 68 years, her children and their spouses: Lyla (Ray), Wayne (Martha), Dwayne (Barb), Randy (Susanne), Dawnna-Lee (Miles) and Kevin (Stacey). Brother Gordon (Marlene) Reeves and Sister Jeanine Reeves. She also leaves behind 16 grand children and 30 great-grand children.

Donations in Mary-Ann's memory can be made to: