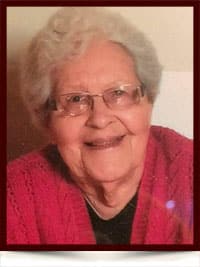 With much sadness, our family announces the passing of our mother Maureen Parker (nee Harris) at the age of 90 years.

Maureen was born and raised in England, served in the Women’s Land Army during the Second World War, and emigrated to Canada as a war bride in 1945. Maureen went back to England in 1990 and returned to Canada in 1999.

The family thanks the staff at the Edmonton General Continuing Care Centre for the kindness, care and support shown to Maureen for the past three years.