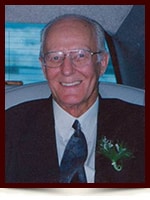 It is with great sadness that we announce the passing of Donald Harvey McCombie at the age of 88 years old. He will be sadly missed by his loving wife Donalda, children Marilyn, Trish, Bob, Dee Dee (Hans), Dolly (Robert), Chrissy (Tim), John (Liz), 11 grandchildren, 5 great-grandchildren, nieces, friends and his dog Harvey. Don was predeceased by his daughter Kerry, sister Dorothy and son-in-law Gino.

Don was born in Edmonton on June 11, 1927. He married Donalda on August 24, 1951 and had 8 children together. Don had a successful business and was involved with horse racing in Alberta but perhaps his proudest accomplishment was being a co-founder of Edmonton Minor Hockey Week as he was very involved in the Edmonton hockey community.

Special thanks to all who visited Dad in the hospital especially his friends Bob Tessier and Kenny Deines. As well as a heartfelt thank you to the staff at the U of A Hospital Unit 3G3.

In lieu of flowers or donations, an act of kindness in Dad’s honour would be appreciated. Cremation has taken place.