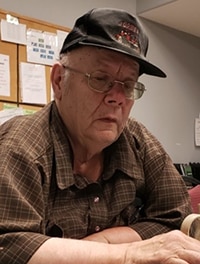 It is with deep sorrow that the family of Neil Edwin Whitford Sr. of Fox Creek, Alberta announces that he passed away unexpectedly on July 26, 2019.

Neil had a long career in operating heavy equipment and building roads & leases.  His passion led him to start his own company Jordee Construction in 1995. Neil had the opportunity to work with many different people over his years and enjoyed ‘teaching’ them how to do it right!

Neil was very proud of his family and took them on many camping & road trips.  He also shared his desire for ‘road trips’ with many others.  He loved all animals and spending time in nature.  He enjoyed catching many sunrises and watching the birds at the lakes.  You could always find him driving around in search of a companion to share his next ride with.

In keeping with Neil’s wishes, a formal service will not be held.

In Lieu of flowers the family encourage donations in Neil’s name be made to any Animal Rescue Society.