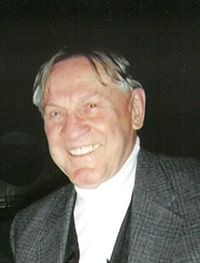 It is with heartfelt sadness we announce Dad's passing, at home, with his loving son David by his side, two weeks before his 89th birthday.

He was predeceased by his four siblings Mary, Bill, Leo, and Tony, and his eldest son Martin.

Dad will be greatly missed by his children Sandra, David, and Donna. Dido and Great Dido will be lovingly remembered by his grandchildren Amy (Tom), Nicholas (Samantha), and Ashley (David), and by his great-grandchildren Emerie and Markus. Uncle Nick also leaves several nieces and nephews.

Nick was an avid reader and well travelled, especially in his later years, even though he never retired.

At Nick's request, no service will be held. Memorial donations may be made to the Cross Cancer Institute.