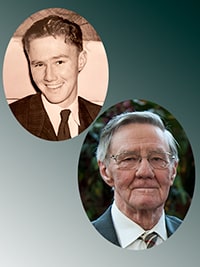 On October 23, 2018 Ogilvie Gray (Oggie) Thomson of Edmonton, Alberta passed away at the age of 88 years.

Oggie started his work life working with Westinghouse in Winnipeg MB.  While continuing his career with Westinghouse he then went on to support the construction of Hydro Electricity projects in Quebec and across Canada.

In 1956, Oggie started in the oil business with Imperial Oil in Winnipeg MB.  After spending 17 years with Imperial Oil in Winnipeg, the Refinery was shut down and he was transferred to Dartmouth, NS in 1973.  In 1974, Oggie accepted a loan assignment to the Strathcona Refinery in Edmonton and remained in Alberta as he accepted a position with Syncrude Canada in Fort McMurray in 1975 where he worked until his retirement in 1986.

Oggie will be fondly remembered and deeply missed by his family, friends and all those who knew him.  He always made time for people and would openly share his experiences and stories with co-workers.  He was affectionately known as “Papa” to his grandchildren.

Our family would like to thank the care team of the 5 East Unit at the Royal Alexandra Hospital in Edmonton for their compassionate care and kindness during Oggie’s stay in hospital.

In keeping with Oggie’s wishes, cremation has taken place.  A gathering to celebrate Oggie’s life will be held in the near future.  In lieu of flowers, donations can be made to the Alzheimer’s Society of Alberta.