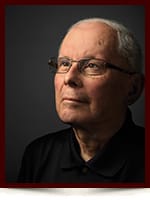 On June 25, 2016, Peter passed away peacefully, surrounded by his family, following a hard-fought battle with cancer. He will be lovingly remembered by Gwen, his wife of 50 years, his three children, Rob Bannerman (Lisa), Carie Fargey-Scott (Phil), Jodi Whitehead (Jim), six grandchildren, Ryan, Brad and Jordan Bannerman, Cally and Brady Whitehead, and Abigail Scott. He will also be missed by his sister Dayle Gaskarth (Dave) and family. Peter was predeceased by his parents John (Bud) and Catherine Fargey.

Peter was born and raised in Calgary. He had many musical talents, finishing his music career as a singer with The Esquires. Working at CHEC Radio in Lethbridge took him from the sales department to the host of the morning show. He resumed working in sales, first in insurance, then in the print industry, at Riley’s Reproductions in Calgary and Edmonton. In 1980, he and Gwen purchased Nisku Printers, and grew the company together over the years, thanks in large part to their loyal, dedicated staff who became a second family. He loved the dynamics and challenges of running a business, although he always remained a salesman at heart. After their retirement in 2009, they enjoyed their winters in Phoenix and summers in Edmonton. Recently, they expanded their travels to destinations they’d always wanted to visit.

He had a deep love of golf, was a long-time fan of his Big Red Machine, the Calgary Stampeders, enjoyed a good debate and expressing his very strong opinions, and was a consummate storyteller. The family will carry on his many “Peterisms”. He will be remembered foremost for his fierce devotion to his family in everything he did. His grandkids were his greatest joy and gave him strength through his health challenges.

The family would like to thank the staff at the U of A Medical Outpatient Unit for the kindness and care extended to Peter.

In lieu of flowers, donations in Peter’s honour may be made to the Alberta Cancer Foundation or the Leukemia and Lymphoma Society of Canada.