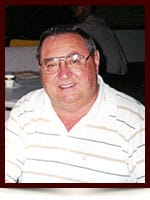 Mr. Ron Sawchuk of Edmonton passed away peacefully at the age of 77.  Left to cherish his memory is his loving wife of 54 years, Rosemarie; three sons:  Terry (Vicki), Bob, Tom (Treena), daughter Karen (Dennis); two grandchildren; Erika, Jessica; sister Louise (George); sister-in-laws Irene and Esther, as well as numerous nieces, nephews and many dear friends and relatives. He is predeceased by his parents Andrew and Mary, and brother's Edward and Walter.

In lieu of flowers, donations can be made to the Cross Cancer Institute.