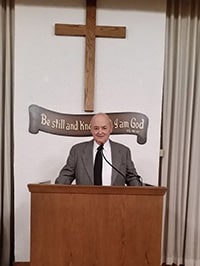 On Easter Monday April 2, 2018, surrounded by his loving family,  Rolf Koenig, a precious husband, dad, Opa, Great Opa, brother and friend,  walked out of his worn out earthly body and stepped into a brand new one.

Rolf was a man of deep spiritual conviction and took servitude to a level that would be hard to surpass.  Quiet and unassuming,   but uncompromising when it came to truth, integrity and honesty, Rolf rarely spoke about his role as a leader of a small congregation or about times that he would go way out of his way to assist and/or pray for somebody.  He was a prayer warrior and when he prayed we knew God was going to answer.

Fiercely loyal and proud  of his wife and children,  Rolf never wavered  in his role as the leader of his home.  He laughed a lot, loved to tease his wife / kids and though he was not rich in earthly goods he always found a way to surprise them by taking them on holidays, buying them gifts and ensuring that EVERYBODY ate well at his table.

Rolf’s life left a big hole in the fabric of his family and many, many other’s lives when he stepped away, but that hole holds thousands of memories that many will recall for many years to come.

We are looking forward to that most glorious day when we will be reunited to spend eternity together.  Come soon Lord Jesus!