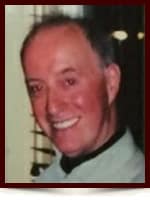 Ross will forever be remembered for his sharp Irish wit and readiness to burst into song and his great love of family, God and the Catholic Church.