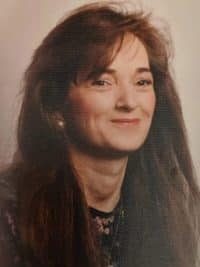 Sherry Grace Harris passed away unexpectedly at the age of 57 on October 9, 2019.

Sherry was born on October 10, 1961 in Edmonton, Alberta. As an infant, she was diagnosed with blood poisoning, which would set the stage for a life of difficulties with her leg, back, and hip, but it did not slow her down! Sherry started her career in security at the Edmonton Public School Board in 1981 and worked there until her passing. She was proud when they bought her a special chair for her back and leg. Sherry enjoyed making shadow box art, sewing, shopping, and camping/fishing with her friend Darren.

Sherry was predeceased by her parents: Stephina and Ted Harris; brother-in-law: Wade Sim; her grandparents, and many aunts and uncles.

Sherry was a strong person who never feared anything or anyone. She will be greatly missed by everyone who knew her.