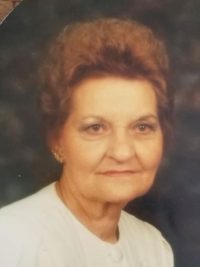 Sophie grew up in Athabasca; enjoyed dancing and baseball and later loved hockey and was an avid Oilers fan. She left Athabasca when she married Bud Guest, and lived all over the Western United States while he worked for the American Oil Fields. Moving back to Canada and eventually making Peace River, AB her home where Bud passed away. She later married James Hoy and owned and managed the dress shop "Sarah Jane Fashions" in the 1980's. Retired to Penticton, BC and later moving back to Edmonton, AB where Jim passed away, then from Edmonton to Leduc, her final home.

Sophie will rest peacefully at Willow Park Cemetery in Lac La Biche, AB with her parents.

There will be no funeral at her request, but a family gathering will take place in Lac La Biche in the summer of 2020.