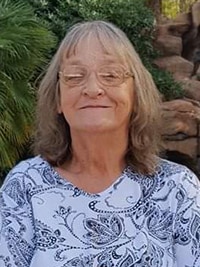 It is with great sadness her family wishes to announce the passing of Stella Sonnenberg, currently of Weyburn Saskatchewan, and formerly of Westlock Alberta, on Friday January 11th, 2019 at the age of 71.

She is predeceased by her second husband Arthur Sonnenberg. She is survived by her first husband Martin Wasuita, and their five children: Tony Wasuita (Yvonne), Joe Wasuita (Candise), Joyce Wasuita, Linda Stark, and Grace Irons.

A celebration of her life will take place at a later date.

In lieu of flowers, a donation can be made to The Royal Alexandra Hospital Cardiac Care Unit in Edmonton, Alberta.