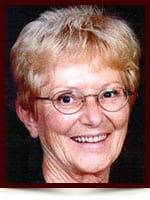 It is with sadness and loneliness that we announce the passing of Stella Sarvage at age 81 years as a result of cancer.

Stella was born and raised in Yarbo Saskatchewan. Stella was an honors student at her high school in Esterhazy, Saskatchewan, and an honors graduate at Misericordia Hospital School of Nursing in Winnipeg, Manitoba. Her nursing career was extensive as she worked in various hospitals in Manitoba, Saskatchewan, Alberta and British Columbia. Stella loved golf, and two of her crowning moments of the game were, when she scored a Hole in One at the Springs Course in Radium, and when she scored an Eagle at Twin Willows in Edmonton Ladies League.

Cremation has taken place. At Stella’s request a memorial service will not be held.