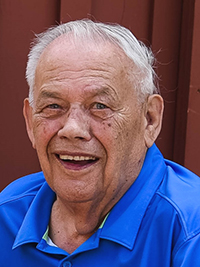 It is with heavy hearts that we announce the passing of Steve Kulych on Thursday March 26, 2020 at the age of 88 in Edmonton.

We would like to thank the nurses and doctors at the Sturgeon Hospital that helped keep him comfortable during his fast decline.

He has gone to reunite with his loving wife Doris, his parents John and Sophie, brother Marshal, and other family members and friends. The challenges since his stroke had frustrated him from being the independent person he was, but he always enjoyed the visits and phone calls he received.

Celebration of Life
Due to the COVID-19 situation no service will be held at this time. Steve will be cremated and the family will be having a celebration of life at a later date.

Memorial Donations
In lieu of flowers, donations can be made to the Heart & Stroke Foundation, or the charity of one’s choice.