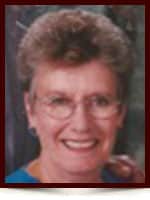 Sylvia was born to Esther and Benedict Johnson on June 26, 1939 in Grandy (Wynyard) Saskatchewan. She was the third of four sisters, Shirley Ann (Grant) Laxdal, Sheila Mae (Lauren) Carlson) and Edna Johnson. Sylvia married Clarence Frank on August 24, 1958 and they were blessed with two loving daughters Kim (Mike) McGill and Candace (Albert) Rivet. Sylvia took great joy in her two grandchildren Landice (Steve) and Brandon (Sierra) and she loved her great grandchildren Nashville, Decia and Bodhi.

Sylvia and Clarence traveled Canada for the first 6 years of their marriage having 17 different addresses from Salmon Arm, BC to Halifax, Nova Scotia. They moved to their farm in Waskatenau in 1976, with Pauline and Glen Hemminger where they lived for 35 years. Sylvia had many talents and enjoyed gardening and flowers. She was a fabulous cook, baker, and chocolate maker (well known for her Icelandic vinarterta and brown bread as well as heavenly tarts) and she won several prizes at the Waskatenau Fair for her culinary skills. She loved to sew and made beautiful clothing for her daughters and many, many square dance outfits for herself, Clarence and others.

Sylvia was always very involved and volunteered in her church, and her love for the Lord shone through her in many ways. She was a woman of great faith, a special wife, mother, daughter, sister, aunt, niece, cousin and friend and her smile and laughter will be missed by all who loved her.