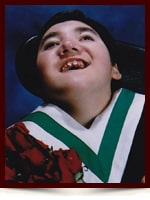 With sadness we announce the passing of Trisha on Sunday December 12, 2010 surrounded by her family.