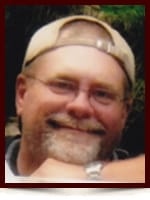 On May 6, 2011 Vincent Dale of Fort Saskatchewan passed away at the age of 45 years.

The Family would like to extend their sincere thanks and gratefulness to his many friends and associates.

Donations
In lieu of flowers, memorial donations may be made directly to a Trust Fund for Madison and Jackson
C/O In Trust - Bobbi-Lynn Auger Box 23 RR2 Site 20 Tofield, AB T0B4J0