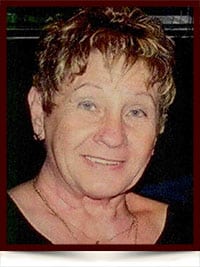 Viola Bourgoin ( nee Kirouac) passed away September 18, 2016 at the University Hospital in Edmonton Alberta after suffering a severe stroke at the age of 76 years old.

Born January 23, 1940 at Notre Dame de Lourde, New Brunswick to the late Doria ( nee Michaud ) & Emile Kirouac. The oldest of 15 children. Married Alveo Michaud on July 11, 1955 in NB and brought 10 children into the marriage. Alveo Michaud passed away from and accident March 31, 1971 leaving her with a large family.

In February 1977, left NB for Alberta with her best friend, Edgar Bourgoin & later became his wife & born her 11th child. Together with Edgar’s adult sons worked all over Alberta doing construction. In 1988 they purchased a trap line #2360 and live on the line, trapping, hunting and fishing together. Retired in 2009 & resided in Caslan, AB.

Viola was an amazing woman, stronger than most, a loving wife, a great mother, adored by her grandchildren, a loyal friend and loved life to the fullest. She was a great cook, had a passion for reading & gardening, possessed amazing bush skills, loved trapping, fishing & hunting. She was Edgar’s right hand in everything they accomplished in life.

Cremation to follow with no services held as per her living will.
Address for Card for the family, Edgar Bourgoin - Box 109, Caslan. Alberta T0A 0R0

To Those I Love
When I am gone, release me.
You have many things to see & do.
You must not tie yourself to your tears.
Be Happy that we had so many years.
I gave you my love.. You gave me my happiness.
So grieve a while for me & then be comforted
by trust and your memories of my heart.
I will be near if you listen with your heart
and then when you must come this way,
I’ll greet you with my smile.