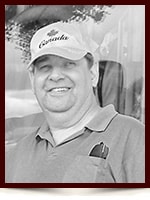 It is with great sadness the family of Wayne David Leslie announce his passing on July 12, 2014 at the age of 66.  Formerly of Carleton Place, Ontario and originally of Alliston, Ontario, Wayne passed away peacefully with his family by his side.  He leaves behind his daughter Bobbie-Jo Yacey (Kevin) of Myrnam, Alberta, his granddaughter Kelsey (Aaron) of Mallaig, Alberta, his Uncle Victor (Jeanette) Leslie of Alliston, cousins Rosanne (Scott) McCague of Etobicoke, Ontario and Christeen (Bill) Lewis of Alliston and their families. Wayne was predeceased by his parents Roy and Merle Leslie in 1959.