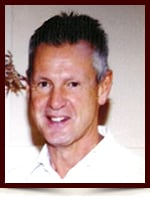 It is with deep sadness the family of Ian Gray announce his passing at the age of 57 on December 11, 2015 at the Grey Nuns Community Hospital, Edmonton. Ian is survived by his loving fiancée Valerie Douglas, his daughter Meighan (Vern), grandchildren Raiden and Nora, brothers Gord and Ken, his father William “Scotty” Gray and mother of his daughter, Kathy Koziak.

He was predeceased by his mother Isabella and brother Malcom.

As Ian liked to tell people, he was manufactured in Scotland and produced in Canada.  Born in Edmonton he enjoyed playing all kinds of sports. Football through high school, water skiing, scuba diving and playing hockey with the Edmonton Transit team where he was a transit driver for 28 years.

He will forever be remembered for his sense of humor and kind heart.

A private cremation was held.