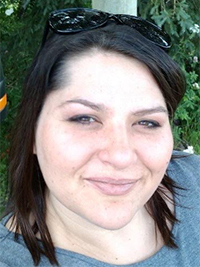 It is with deep sadness that we announce the passing of Christal Lee Capostinsky. She went to be with the Lord after a lengthy illness. Although her mind was willing to carry on, her body could not.

Christal’s 45-year journey is a testament to the strength and courage of the human spirit. She overcame numerous obstacles in her younger years and fought hard for a better life for her and her son.

Christal accomplished a lot during her short time here. Between 2004 – 2007, she sat on the board of the Northern Women’s Information Centre and became a peer support worker with Positive Living North. As a college social work student, she founded the New Hope Society in 2005, As Executive Director and human rights activist, she fiercely and passionately advocated for oppressed women, particularly women and youth involved in sex work. Christal partnered with CASEY (Communities Against Sexual Exploitation of Youth) and BCCEW (B.C. Coalition of Experiential Women) during this time.

In 2006, Christal received her social work diploma from the College of New Caledonia .She then attended the University of Northern British Columbia and earned her degree in social work in 2008. That year she was presented with the Bridget Moran Advancement of Social Work Award and the Governor General’s Award for the sensitivity training she provided to the R.C.M.P. on dealing respectfully with sex workers. She  immediately launched into the Masters of Social Work program at UNBC. Christal became the Pacific representative for the Canadian AIDS Society. She accomplished all of this while working full time as a child protection worker for the Ministry of Children & Family Development. In 2013, Christal received her Masters Degree in Social Work from UNBC. In 2015, Christal and her son moved to Edmonton. She was employed
as a Family Interventionist with the Family Centre of Northern Alberta.

A celebration of life ceremony will be held at a later date. In the meantime, a UNBC Social Work Bursary fund is being set up in Christal’s memory and plans for a memorial bench to be placed at the university. All of this information will be published when details are confirmed.