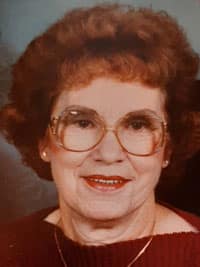 It is with heavy hearts that we announce the passing of our mother, grandmother, and friend Mina at the age of 97.

She is predeceased by her husband John, mother and father Wilhelmina and Gustave Deisting, and numerous brothers and sisters. She is survived by her sons Randy and Kenn, grandchildren Jennifer and Cory, sister Hilda, and a large and loving extended family.

She grew up in the Breton AB area and moved around a bit before marrying John in 1953. A few years later they bought a house in the Lauderdale community in Edmonton. Mina stayed in the same house for 60 years and had many neighborhood friends. She loved her garden and yard and when it became too much for her to care for, she moved into Kensington Village which became her home for 5 years where she passed peacefully. We are very thankful to the staff of Shepherds Care Kensington Village who accepted Mina and loved her as one of their own.

At a later date, after covid, a celebration of Mina’s life will be held and she will be laid to rest alongside John so they can be together again and always. Although we will mourn, we must also celebrate her long life. Rest well mom, we love you and will miss you.

Donations to the Shepherds Care Foundation in Mina’s name will be greatly appreciated.