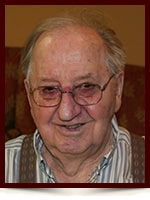 Nick Ewaskow was the youngest of nine children along with his twin brother Bill.

He was employed for 27 years at Canada Packers to support his four kids Brian, Cyndy, Reg and Daryl.

He was a passionate father, grandfather and hunter who loved his family and the outdoors. He enjoyed time with his grandchildren and great-grandchildren. Later in life, also at a dance, he met Adelaide Wood and spent the remainder of his years with her.