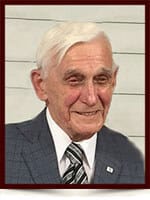 It is with great sadness that the family announces the passing of Aage Frandsen on Thursday August 17, 2017.