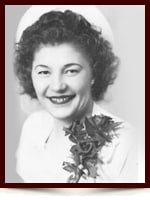 She is survived by her son, Erroll (Judith) and two grandchildren, Matthew and Ruth.

Alice was a dedicated mother and wife, and worked for many years as a seamstress as well as for Eaton’s.  She enjoyed sewing, knitting, homemaking, and gardening.   Thanks to the staff at the Leduc Community Hospital, Royal Alexandria Hospital, Glastonbury Mews and Lifestyle Options Leduc for their dedication and support.