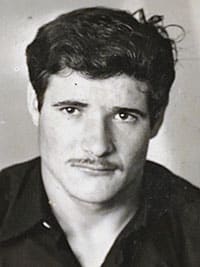 At the age of 28, Antonio and Maria moved with the children from Soajo, Portugal to Edmonton, Canada. They lived with family in North Edmonton for one year before purchasing their first home in 1974. Antonio was a member of the Carpenters Union of Alberta for over twenty years. Even if he occasionally forgot to use a tape measure, he still put everything he had into his building projects. He worked hard and instilled the same work ethic in his children.

He says spoke 4 languages, although we rarely heard the Italian. He was an animal lover and the family shared their home with many special pets throughout the years. He was an amateur musician playing the accordion and the fondly remembered castanets. He enjoyed gardening and cycling. He adored his grandchildren and they were a constant source of joy to him and Maria. His use of Facebook helped him stay in touch with friends and family in Portugal. He took joy out of sharing life in Canada and Portugal with both sides of the screen.

Rest in peace Antonio. You were loved and will be missed.

Due to current COVID-19 situation attendance will be limited to registered guests only.