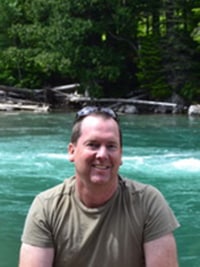 The family is saddened to announce the sudden passing of Bruce Harold Hudson, aged 53.   He was the son of Albert and Millie Hudson (nee Lee) and brother of Brett (Liette).   Bruce and Laura have been married for 23 years and together for 28.  Father of Samantha, Jessica, Siobhan and Emma. Grandfather of Imehjen, Ariana, Clayton, and Aurea (deceased).

Bruce was raised in Campbell River, graduating from Carihi Secondary in 1983. Bruce began his working career at Westmin Resources at Myra Falls. He later moved to the Fletcher Challenge mill in Campbell River. When offered the opportunity of an Instrumentation Mechanic Apprenticeship, he embraced it enthusiastically. This involved working at the mill and several six week stints in Vancouver while raising young children. Despite this heavy workload he achieved his Journeyman Certificate and was able to begin a new career in his chosen profession. He and his family moved to Beaumont, Alberta. He commuted to Fort McMurray, working for Spartan Controls Inc. where he spent ten very happy years.

Bruce was a true family man. He was happiest in the company of his girls.  He also loved StarWars and quirky socks, Halloween, fine scotch and the Colorado Avalanche. He was taken too soon but lived a very full life.