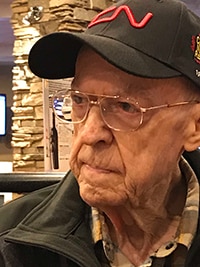 Cliff is survived by his 3 daughters: Debbie (Greg), Laurie (Larry) and Sandra (Leonard), as well as numerous grand children and great grandchildren.

He was pre-deceased by his wife Joy.

Cliff was born in Galahad, Alberta in 1938. He had a long fulfilling career with CN in Edmonton from 1955 retiring in 1996

He will be dearly missed by all.

At Cliff’s request no formal service will be held and cremation has taken place.