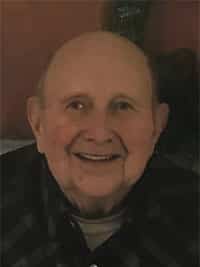 With heavy hearts, we announce after a short battle with cancer the passing of our father Clifford Lewis Bartlett.

Cliff was born in Leroy, Saskatchewan to Jennie and Prentice R. Bartlett on May 5th, 1935.

Left to mourn are his children: Corinne (Les), Wayne (Liz), Blair (Cyndi); his sisters: Joyce Christopherson, Pearl Grieve and Thelma Crawford; ten grandchildren, eight great-grandchildren as well as numerous nieces, nephews and many dear friends. He was predeceased by his parents and his sons Allan and Lance.

Early in Cliff's career, despite his horror of heights, he learned to rappel during logging operations in Telseqwa. The skill he later applied to his mind rescue career. In the late 1950's he began his mining career working in safety and mine rescue. This took the family to many locations including Salmo, Mica Creek, Revelstoke, Kamloops, Granisle and Hinton where he retired in June of 1996.

During his career he earned many awards including the "Order of Canada" for teaching First Aid. Also the St. John's Ambulance Alberta Council for "Excellence in Teaching". Numerous mine rescue awards including Alberta Surface Mine Rescue Competitions Champions in 1993.

After leaving the farm in 2017 he enjoyed his many friends at the A&W Coffee Club and the Seniors Circle playing crib and enjoying potluck and socials.