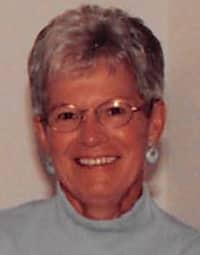 Darlene Hamilton, much loved wife, mother, sister and friend, passed away on October 19, 2019 after living with Alzheimer’s Disease and, more recently, cancer.

She is predeceased by her son-in-law Barry Scott, five brothers and two sisters.

Darlene grew up in Unity, SK and was the first in her family to attend post secondary school, graduating as a nurse in Saskatoon in 1958. She and Scotty married in 1959, and after the birth of their second child
in 1962, the family spent the next 16 years in Ottawa prior to relocating to Edmonton.

With Scotty, she was an avid curler and later a golfer with a short stint at downhill skiing. She started her accounting studies in Ottawa and completed them in Edmonton, achieving her CMA (now CPA) at age 48. A
significant accomplishment of which she and her family were proud. On retirement, she and Scotty were able to enjoy 25 winters in Arizona before her health declined.

A special thank you to the staff at Touchmark for the care and compassion shown not only to Darlene, but to all members of her family. As per Darlene’s wishes, there will be no formal service.

A private gathering will be held at a later date. Flowers are gratefully declined.